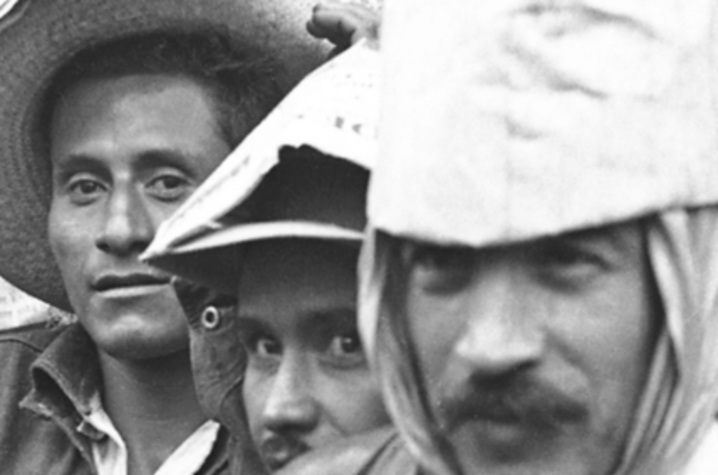 The Braceros Photo Exhibit at the University of Kentucky’s William T. Young Library depicts the experience of Mexican laborers’ emigration as rendered by photographers who were uprooted. Featuring 18 images about the Bracero Program, the exhibit is free and open to all until May 1, 2019.

“Immigration is a significant social topic these days. The Braceros Photo Exhibit offers an opportunity for people to view this topic from the historical perspective,” said Scott Hutson, professor of anthropology and director of the Latin American, Caribbean and Latino Studies Program at UK. “I appreciate anthropology Ph.D. candidate Megan Parker’s collaboration with UK Libraries to bring the exhibit to fruition.”

The Bracero Program (1942-1964), also known as the Mexican-United States of America Program of the Loan of Laborers, recruited Mexican workers to the U.S. to relieve a labor shortage caused by World War II. Images of the migrating laborers were captured by Spanish refugees who had fled to Mexico during Spain’s Civil War. As such, the images were infused with the photographers’ unique point of view as emigrants themselves.

Comprised of six themes, the exhibit is supplemented by an online guide that provides detailed descriptions of the 18 showcased images. Additionally, an in-depth analysis of the Bracero Program is presented by Deborah Cohen (associate professor of history at the University of Missouri-St. Louis) in her book, “Braceros: Migrant Citizens and Transnational Subjects in the Postwar United States and Mexico,” which is available at Young Library.

Year of Migration is presented as part of the College of Arts and Sciences’ Passport to the World initiative, which enables the college to embark on yearlong explorations of different areas of the world and interdisciplinary topics, bringing a wide range of academic and public programming to campus. The program engages UK in crucial global conversations through public lectures, cultural events, coursework and travel opportunities.

UK is the University for Kentucky. At UK, we are educating more students, treating more patients with complex illnesses and conducting more research and service than at any time in our 150-year history. To read more about the UK story and how you can support continued investment in your university and the Commonwealth, go to: uky.edu/uk4ky. #uk4ky #seeblue