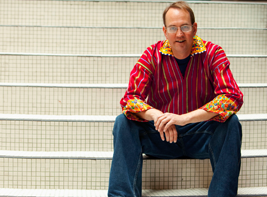 Our world is rich in cultural differences, but the one connecting factor between all is language. Yet, as powerful as it can be to connect cultures, it can also work to promote discrimination between them. This distinct power is the largest draw of interest for Rusty Barrett, linguistics professor in the College of Arts & Sciences.

Barrett received his bachelor’s degree in Russian Language and Literature at Trinity University in San Antonio, Texas. After receiving a Master’s in Russian and East European Studies at Yale, Barret worked as a translator and technical writer for the American Institute for Aeronautics and Astronautics. There, he developed an immense appreciation for the subject of linguistics.

“I did work as a technical translator for NASA,” Barrett said. “I was hired to translate Russian, but I was also asked to translate other Slavic languages I didn’t speak.”

This roadblock led to the initial discovery of a passion previously unknown to Barrett.

“I was given a dictionary and told to figure out what the articles said. I began reading about linguistics to help work through them,” Barrett said. “The fact that linguistics made it possible to understand the grammar of languages one doesn’t speak was what pushed me to study further.”

Barrett attended graduate school at the University of Texas at Austin to continue his study of linguistics, completing a dissertation on grammar of a previously undescribed Mayan language spoken in Guatemala.

In 2006, Barrett found his place at the University of Kentucky. Here, he continues his passionate work with linguistics relating to a variety of subjects.

Despite the immense range of research topics, Barrett’s primary interest lies in the relationship between cultures and language, with emphasis upon how beliefs about language can enact forms of social inequality.

“Different ways of speaking and interacting are basic linguistic differences but they are rarely understood as differences in language,” Barrett said. “So, judgements about ‘bad’ or ‘broken’ English are used to legitimize forms of discrimination.”

“Similarly, attitudes towards different ways of interacting, like whether you shout out in churches or movie theatres, often result in unfair treatment of African Americans and Latinxs due to their being perceived as ‘rude’ or ‘dangerous’ while it’s simply different cultural norms.”

Recently, Barrett took his studies on linguistic inequality to present at the Martin Luther King Seminar, held by UK’s Linguistics Department as the keynote speaker.

The presentation detailed “the southern crisis,” where Central Americans seeking asylum in the U.S. are facing difficult treatment, particularly those who speak Spanish as a second language.

“Many people who have died in border custody have been native speakers of Mayan languages,” Barrett said. “The lack of interpreting services for indigenous immigrants is not the result of there not being speakers available, but results from a willful denial of such services on the part of the government.”

“The ‘crisis’ is the direct result of our current government's refusal to follow international law in processing people who cross the border seeking asylum.”

Barrett feels linguists have an essential role in solving problems such as these. These individuals could provide essential training of professional interpreters.

“Linguists can help both in finding ways to minimize miscommunication and in analyzing court transcripts to determine if a speaker actually understood what was happening during their legal proceedings,” Barrett said.

Linguist roles in the abolition of inequality extends further than the current border crisis.

“Because language is at the center of all social actions, a careful look at language use can tell us a lot about how social patterns of inequality and discrimination,” Barrett said. “Linguistics has important insights that can help in the recognition and resolution of disparities and inequalities in education, healthcare, legal contexts and the workplace.”

Barrett passes on his passion to students at UK, reaching them in ways that connect to their various cultures. By teaching classes like Language and Culture, Language and Gender/Sexuality, and Language and Global Hip Hop Culture, he and the department encourage students to engage with the discipline.

“We try to offer courses that help students recognize the ways in which linguistics can be relevant to their everyday experiences,” Barrett said.

“Our hope is to develop strategies for helping to minimize cases in which Mayan immigrants do not fully understand the asylum hearings that determine their futures,” said Barrett.

From all his work, Barrett hopes that the important role linguistics play is not overlooked.

“Because language is the basis for all human interaction, it plays a central role in the reproduction of forms of social inequality,” Barrett said. “Linguistics is an amazing resource for studying a wide range of forms of social injustice and a useful tool in efforts to reduce prejudice and discrimination.”